The Bio-Pure Flowpath for Commercial, Industrial or larger off mains applications

The Bio-Pure Flowpath for Commercial, Industrial or larger off mains applications

All our treatment plants are designed in accordance with the British Water Code of Practice for flows and loads, the Bio-Pure FlowPath range can be designed to meet your population requirements.

The plants can be single or modular tanks depending on population and consent requirements.

Below Ground Installation (Can be adapted for above ground applications)

Easy to install, suitable for installation with either granular or concrete backfill

Typical De-Sludge period is approximately 12 months depending on demand

25 year warranty on all GRP components

Servicing contracts by our team of trained technicians

Deeper installations can be accommodated

Any Invert levels can be accommodated

HOW THE FLOW PATH WORKS

Sludge will build up in these zones and require moving periodically.

The Settled effluent will then discharge forward into the bio-zones. Each segment field contains a high percentage of filter media, where biological treatment performs , due to a high oxygen input.

Once treatment has taken place the multiple bio-zones, the effluent is discharged into the final humus tank, where it settles before flowing via the outlet.

Occasionally an amount of settled humus sludge is returned to the first primary zone. 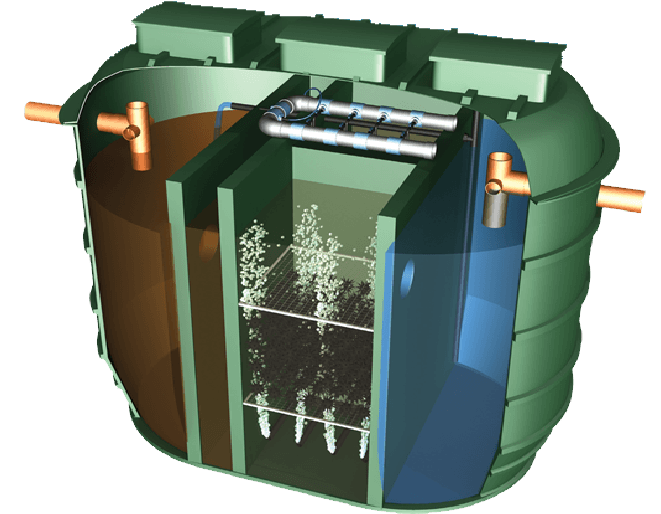 The benefits in our service agreements which are listed below

Emergency breakdown cover for 12 months. If you have any problem with your unit, call us and we will come out and fix it free of charge.

Two service visit per year where all necessary checks are carried out. This includes checking the blower filters, check control panel and connections are sound, Air vents and louvers into the kiosk are free from debris, assessing the aeration pattern, sludge levels and effluent quality.

All labour expenses for servicing and call outs are covered so there are no hidden costs.

The cost of all serviceable parts will be free of charge. This includes, replacing the control panel air filters and carbon filters replacements.

Replacement parts are at a discounted.

Ensuring floating sludge is no thicker than 150mm and the settled sludge is at least 1 meter below the top water level.

Emptying is NOT included in the agreement.

These tanks are designed to be installed below ground and completely surrounded with concrete.

Generally, the depth from finished ground level to the top crown of the main shell should be no more than 2 metres. This may vary dependant upon ground water conditions.

Deeper inverts may be accommodated on a standard shell providing the water table level does not exceed 2 metres above the top crown of the main shell. For deeper burial with high water table conditions heavy duty shells are available.

If the tank is installed outside these parameters it may suffer irreparable damage.

The specification for the concrete mix to surround the tank may be taken from BS 5328 : Part 1 : 1991 (including amendments), taking into account the site conditions and application requirements. For a typical non-structural application in non aggressive soils a Standard Mix ST4 with a 50mm slump is generally suitable, but also permits the equivalent Designated Mix GEN3 to be specified as an alternative. If for non typical applications, structural or other reasons a higher than normal designation is required, the purchaser of the fresh concrete can use table 6 in BS 5328: Part 2: 1991 (amendment 8759/October 1995) for guidance.

Determine the lift height (m), or rate of rise (m/h) for the specific concrete type used, to ensure that a design pressure (P max) of 15kN/m2 on the tank is not exceeded.

The design of the tank assumes minimal compaction of the surrounding concrete. Where necessary, this may be extended to include light internal vibration. Never use deep revibration which will substantially increase the pressure on the tank, possibly causing failure.

Impact of Concrete on Discharge

The effects of impact on discharge are considerable. These are controlled by the vertical form height, the tank diameter and the method of discharge. Under no circumstances should concrete be discharged directly onto the tank.

If the tank is installed in an area where traffic or other superimposed loadings can be applied, consult a structural engineer for the design of a reinforced concrete slab to prevent the load being transmitted to the tank (or its concrete surround). If this slab is constructed immediately above the tank, it should be separated from the concrete surrounding the tank by a compressible material.

Transportation, unloading and storage of tanks

Installation procedures must be in accordance with the Health and Safety at Work Act 1974, and other relevant legislation. Your procedures must also align with good building practice.

NOTE: Check that the depth to the base slab is within the Service Specification requirements for the tank.

NOTE: Never increase the lift height or accelerate the rate of rise for the concrete type used, or allow the concrete to be compacted to an extent which will cause any part of the tank superstructure to distort. If you contravene this warning you will cause damage to the tank.

Tanks must not be subjected to buoyant forces during installation, taking account of ground water levels and surface water run-off, and their accumulation in the tank pit, even if tanks are anchored. The excavation should be maintained dry by pumping or whatever suitable means until the concrete surround is cured

Access extensions shall be surrounded with concrete poured in 500mm lifts allowing initial set between each lift. The pressure from concrete placed in higher lifts may cause access extensions to distort or collapse.

Please note that loose shafts should be sealed using silicon sealant sikaflex –291 or similar prior to installation to prevent ingress of groundwater under high water table conditions. It is the contractor’s responsibility to ensure a watertight seal.

We Build It Ltd